Bitcoin Continues Trading Below $25k Level, Leading To Loss Of Confidence By Investors 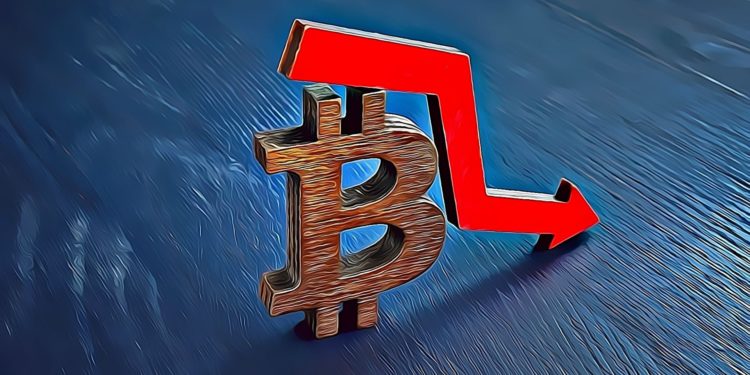 Bitcoin is still trying to cling to present support as trade volume keeps dropping after reaching a high of $25k on Sunday and now sliding to a lower level of $23k.

Even though the market capitalization of the cryptocurrency sector is still significantly higher than $1 trillion, this week’s losses for BTC and ETH have been in the range of 3–4%. Based on the direction the markets for Bitcoin and Ethereum are going, we’ll most likely see more support testing and a fall till next week.

The $23-$24k area is BTCUSD’s favored trading range, according to the monthly bitcoin price chart, despite a decline to around $20k and a few peaks above the $24k range. BTC has traded in this range ever since July 27th.

For the foreseeable future, Bitcoin will still trade inside that range even though it keeps trying to pass the $24k barrier level. BTCUSD regularly monitors price changes on the stock market and tech indices like the NASDAQ.

Unfortunately, despite the NASDAQ’s massive performance this month, which saw an increase of over 25%, Bitcoin has not experienced significant gains for August.

Investors’ confidence is still low due to their hesitation to open long-term bullish bets in bitcoin. This is in response to information that recent mining losses were substantial. Notably, more than $1 billion in losses were incurred by four well-known miners collectively.

As a result of the crypto winter, Coinbase’s Q2 earnings have decreased by around $1.1 billion compared to a profit of nearly $1 billion realized during the same period last year.

How Bitcoin Will React In a Few Days

Despite these market concerns, Bitcoin has maintained its usual trading range without further declines. Additionally, there is still more than $1 trillion in cryptocurrency market capitalization. The longer BTCUSD clings to this level of support, the more likely it is that it will attempt to break through $25k and climb to its three-month high of $30k.

The Fear and Greed Index for Bitcoin has stabilized at 30, having peaked at 46 a few days ago when Bitcoin hit $25k levels. This proves categorically that the market hasn’t steadied, contrary to what many market analysts have claimed.

Many retail investors will be driven into the market after Bitcoin breaks the $30k barrier in the upcoming weeks, generating FOMO, and pushing the cryptocurrency further higher. Beginning a solid bull run or even a relief rally as a result.

With Ethereum’s most anticipated upgrade scheduled for September, big things are in store. With the transformation of the Network from a proof-of-work to a proof-of-stake model, there is a chance that the price of ether will rise significantly.

Ethereum poses significant challenges to Bitcoin because of the forthcoming Merge release. The next large bull run for Ethereum could be upon us, pushing it over Bitcoin in terms of market size. This process, called “The Flippening,” would elevate ETH to the most significant sustainable blockchain status.

Generally, the Crypto market is dull, with most of the altcoins seeing little or no gains at all. However, Fan tokens are on fire as SANTOS recorded almost 200% profit, from $5.888 to $17.000. Others like JUV, PORTO, ACM, ALPINE, PSG, and JUV are seeing over 50% increase each.

Also, This could be a perfect moment to build long-term investments in undervalued projects, given how quiet the bitcoin market is currently. If you want to invest in virtual property, NFTs, or the Metaverse, their current cheap prices are great for long-term ownership.

Bitcoin Price Holds Above $21,000, While Transaction Fees Fall Below $1