ApeCoin’s Otherside is one of the most anticipated Metaverse projects in the cryptocurrency community. After an epic land sale last month, which broke the Ethereum network, it’s clear that ApeCoin’s community is one of the most robust of all the Metaverse projects. On Saturday, July 9th, the Otherside team completed the second load test on their servers, testing out spatial audio and thousands of players on one map.

Users took to Twitter this weekend, showcasing clips of the load test with thousands of players interacting with each other on a blank map.

Enjoyed my first experience on the #OthersideMeta in the load test. Incredible this runs in the browser with smooth 3d rendering across thousands of players with spatial audio. This is the future! pic.twitter.com/HrdZB0koSB

During the load test, users could interact with each other, send messages in the chat, and perform emotes. The game’s overall design and layout are similar to Fortnite, especially during significant events like the Travis Scott and Ariana Grande concerts.

The next event planned for Yuga Labs’ Otherside Meta is scheduled for July 16th, where Otherdeed land owners will be eligible to participate in the game demo, titled Otherside Meta’s First Trip.

On June 27th, @OthersideMeta announced on Twitter a 2-question survey to help them with the headcount for those interested in participating in the game demo.

Calling all Voyagers! Are you free for the First Trip on July 16th? Head to the official Otherside discord to answer a 2-question survey to help us with the headcount. Excited for you to explore, give feedback, and help us make the Otherside everything you want it to be.

There haven’t been any additional details regarding Otherside’s First Trip.

After initially selling for over 9 ETH per plot of land in May, Otherdeed for Otherside virtual real estate prices have been dropping significantly over the past two months as the crypto bear market took the industry by storm.

However, as cryptocurrency prices continue to trade sideways, the prices for Otherdeed for Otherside plots of land started to recover after hitting a bottom of 3.6 ETH on July 4th.

The average price for a plot of land in Yuga Labs’ Otherside almost doubled in the past week, currently at 6.3 ETH, according to data from OpenSea. 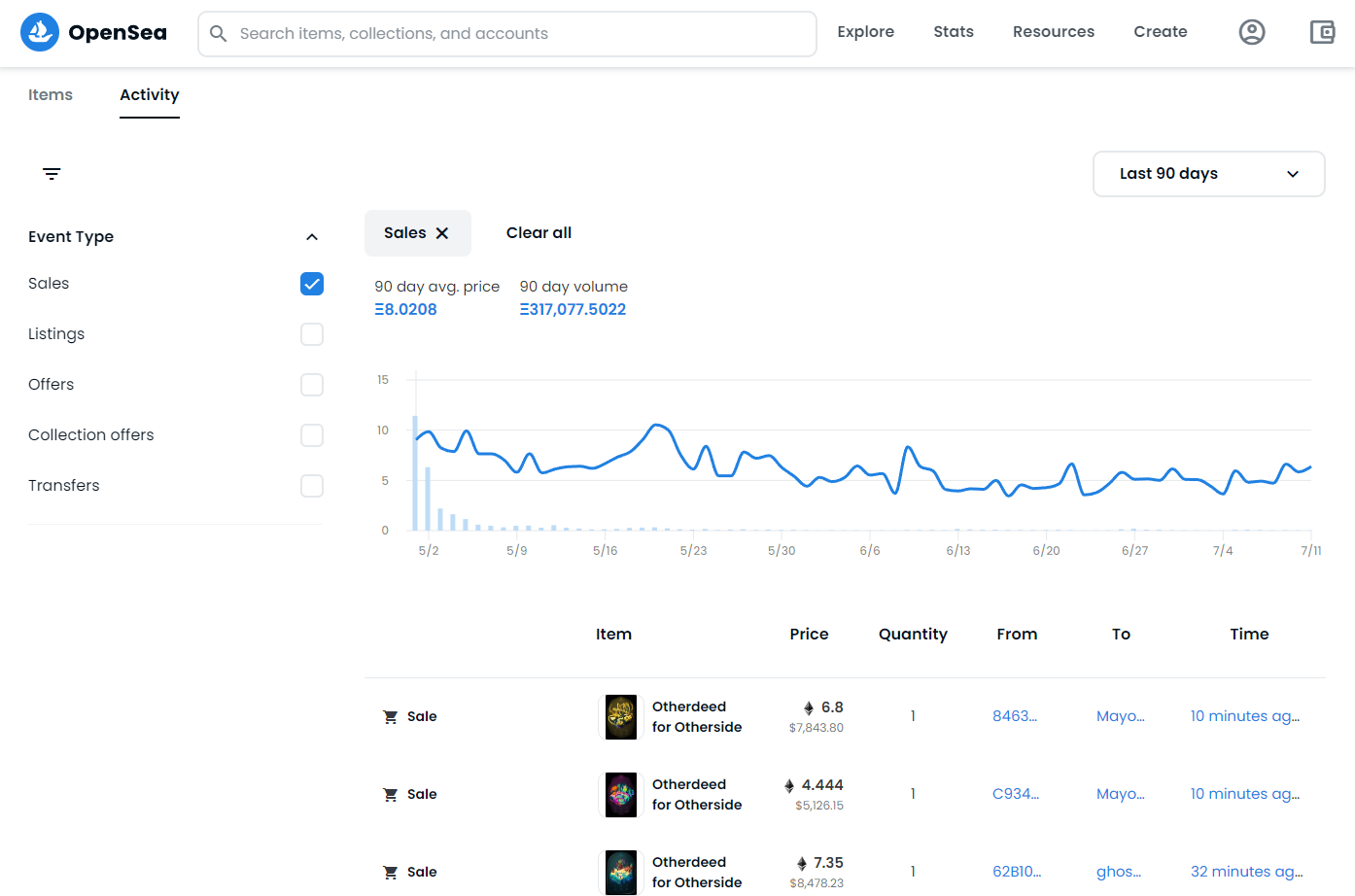 It’s clear the recent load test and the upcoming game test have had a positive influence over Otherside Meta’s land prices, despite the cryptocurrency market showing little momentum this week.

Unfortunately, ApeCoin (APE) didn’t see much bullish momentum this month but still holding support relatively well, only declining by 1.86% in the past week. APE is currently trading at $4.55 with a market capitalization of $1.3 billion, making it the third-highest-valued Metaverse crypto coin.

If you’ve been meaning to purchase virtual real estate in the Metaverse, now could be an excellent opportunity to hop on board with top projects like Decentraland, Axie Infinity, The Sandbox, and Otherside, as prices were still relatively low compared to the insane valuations during the hype only a few months ago.

While cryptocurrency markets may continue to slide downwards with looming recession and inflation fears, the likelihood of another significant bearish drop in the next few months is becoming less and less probable as Bitcoin and Ethereum prices manage to hold support.

Disclosure: This is not trading or investment advice. Always do your research before buying any cryptocurrency or investing in any Metaverse projects.

Follow us on Twitter @thevrsoldier to stay updated with the latest Crypto, NFT, A.I., Cybersecurity, Supercomputer, and Metaverse news!

Bitcoin ATMs Installation Adoption – (How To Find And Use Bitcoin ATMs)